There are some states without income tax, and amongst many of the high income earners I know, they’d love to live in one. So much so, in fact, that I often get question marks and eye rolls when I tell them that living in California is great. Many of my friends won’t even think about California because of the state income taxes here.

However, is it really all that beneficial to live in states without income tax? That’s what I’m going to look into here, and we’ll see what the outcome is.

There are 7 states without income tax, Alaska, Florida, Nevada, South Dakota, Texas, Washington, and Wyoming. Tennessee and New Hampshire also don’t tax earned income, HOWEVER, they will tax investment income. So, any interest income or dividend income will be taxed at 5% and 2% respectively (for 2019), and you’ll have to file state income tax return.

Everyone else charges a state income tax that you have to pay. If you have any, you can ask your tax questions using TurboTax Live right from your home. See the chart below for the differences. 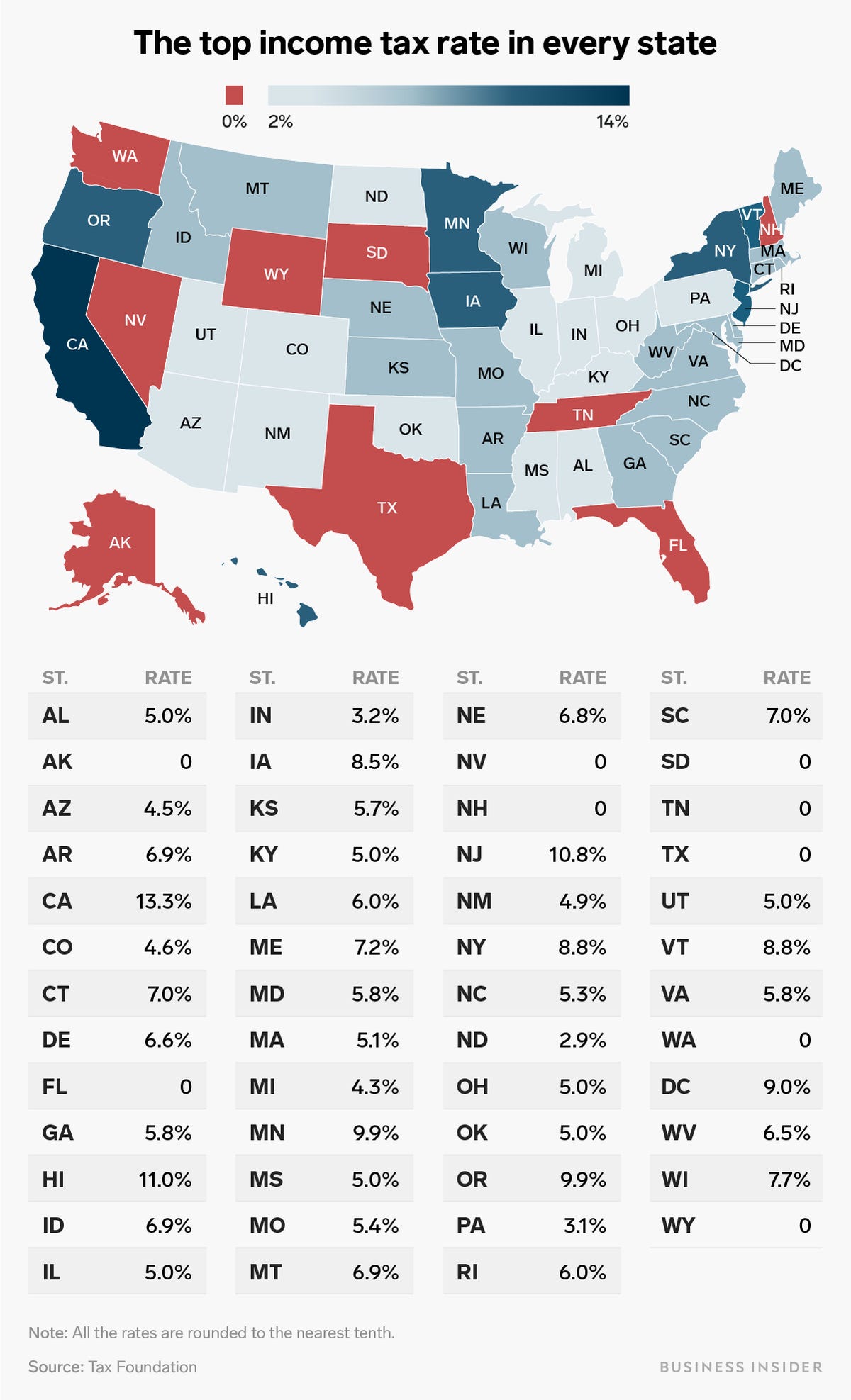 There are some stark differences amongst the states as you can see in the chart. Of the states that do have an income tax, some charge a flat rate (meaning everyone pays the same percentage independent of salary), and some charge progressive rates (meaning the more you make, the more you pay). The rates in the chart reflect the highest tax rates possible in that state. For more information about that you can check out the excel chart at taxfoundation.org.

While it’s a nice thought to say you get to save money when you live in a state without income taxes, it’s important to realize something:

States have to make money somehow, so if they aren’t taxing your income, where is their money coming from?

States Without Income Tax Make Money in Other Ways

While living in a state without income tax may save a deduction from your paycheck and decrease your local tax burden, you will definitely be paying the state in other ways. For instance, there are other taxes you pay for: property tax as a homeowner and sales tax any time you go shopping. Let’s take a look at those numbers by states

The states without income tax are bolded so you can find them quickly. As you’ll see, our friend New Hampshire charges an arm and a leg in property taxes AND the high cost of homes there results in a significant payment for the year. (This is ranked lowest – number 1- to highest – number 51)

Many people may argue that the values here are far less than a state income tax payment, and while that may be true, these costs do add up. And remember, this is money you will be paying once you become a homeowner; there is no escaping it, whereas there are ways to reduce your personal income tax burden.

If you’re thinking, “oh I can just write off the property taxes..”, that will only be possible if you itemize your deductions on your federal tax return and under new tax laws now that is only beneficial if your deductions are more than the standard deduction (which was recently doubled).

We pay sales taxes when we buy anything and everything. (There are four states that don’t: New Hampshire, Oregon, Delaware, Montana and Alaska [while no state level sales tax, there is regional or local sales tax.])

Groceries? Sales tax (some states don’t do this, you can find that list here)

Sales tax is that annoying leech that tacks on to every receipt and then you wonder why and how you’re paying a higher price than what you read on the price tag.

This table lists the top 25 highest sales tax states in the US and their corresponding sales tax rates. Four of our non-income tax state friends make this list, including the number 1 spot.

Tennessee, Texas, Washington and Florida all make the high sales tax rate cut off, with Tennessee showing the highest combined sales tax in the country.

Did you know that the cost to register your car in your state, varies? I didn’t realize how MUCH the variation was until I looked it up. Most states charge a flat annual rate each year, others do a weight based rating system, and still others use other criteria. I also noted that in some states electric cars get charged extra! I thought it would be the opposite but there you are.

Since we are focusing on states without income tax, I will only address the costs of vehicle registration in those states:

Apparently driving in Florida will also cost you an arm and a leg and Alaska likes to check on you twice a year.

As you can see though, there are hidden costs everywhere. To give my own example, In California, the base cost is only $46. But then there are all these hidden fees based on the type of car I drive, my location, driving record, and a highway patrol fee. All in I pay a little over $200 just to keep my car registered in the state. So don’t let these base numbers fool you; when it’s all said and done you will be paying a tidy sum.

To check on the costs in your state, or state you’re thinking of living in, check out this website and search for the state.

Cost of parking and speeding tickets

Speeding ticket maximums vary by state. Tennessee is apparently the cheapest place to get fined (max $50), and Nevada one of the most expensive (max $2000).

Same goes with parking tickets. Those rates can vary by state and by city/county. It also depends on what kind of parking violation you’ve performed.

Bringing it all together

As you can see, even if your state isn’t taking your income directly, they will take it indirectly. And they have to; states need income to maintain roads, public schools, provide law enforcement, and fund other public services. As annoying as it is to pay taxes, the point is to help improve the community we live in. Even if you’re “saving” in income tax, you will be paying in other ways.

New Hampshire, without an income or sales tax, as a result has one of the highest property tax rates in the country.

Tennessee only taxes income dividends but has the highest combined sales tax rate in the country.

Texas and Florida have higher-than-average property tax rates. Wyoming and Alaska have the advantage of natural resources to help make up for lost income tax revenue, cashing in on oil drilling and coal mining operations.

How else does this affect the people?

Individual income tax rates, for most states, are progressive as I mentioned above. Meaning the more you make the more you pay. Sucks if you’re a high-income earner, however, this benefits the general population by paying for their public services and programs and wages.

On the flip side, sales and property taxes are constant and do not fluctuate no matter how little or more you make. As a result, then, the state relies on everyone to pay the same level of sales and property tax, for instance. This can place a larger burden on low-income earners, especially if the state is compensating for lack of income tax income.

Is a state without income tax right for you?

It depends on a lot of factors. The uptick in non-income tax costs may not be as much nor have as much of an effect for high-income earners and so a state without income tax may be a better deal overall. It’s important to keep in mind, also, that if you structure your investments and savings a certain way, you can provide a tax shelter for your income and reduce your total tax burden anyway. In addition, if you own your own business, or have a corporation of some kind, the kinds of personal income taxes you have to pay as a result will also be different.

I’d say that instead of only thinking about this when making the decision to move, that you take into account everything else that’s also important: personal preference, proximity to family, job opportunities, and lifestyle goals.

For me, yes I pay a premium on all fronts to live in California, but the weather, the lifestyle, the diversity, and the job opportunity I have here trumps that premium cost. I own a home here and I know that, in the long run, it will hold its value better than other areas of the country independent of market fluctuations. I’m close to an international airport to help with my travel obsession and I never have to worry about the weather. So for all those reasons I’m happy with my choice.

On the flip side, I have friends that refuse to live anywhere other than a state without income tax. For them the benefits and savings far outweigh these other additional costs, and they manage their lifestyles just fine.

This post isn’t to point out that one decision is better than the other. I just wanted to present the realities that we face. One decision to save on state income tax, can actually just lead to other, higher costs.

For anyone looking to move, or taking these things into consideration, just be aware of everything that comes with that decision!

11 thoughts on “States Without Income Tax: Is There a Benefit to Moving?”

FREE Financial Guide to Get your Finances in Order

Enter your email for a pdf detailing retirements, investments, savings and debt payments to help you get started with getting your financial house in order.

Check your email for your guide! :)